the NAIA toilets clean and supplied with water, soap and toilet paper is good news not only for tourist but also for OFWs and their families.

Last March, when I sent my brother off at the NAIA, I mustered all my strength so I wouldn’t puke at the smell of the toilets. There was no water. But I had to choose between puking and peeing on my pants, as I couldn’t hold it any longer.

OFWs saved the country from the 2007-2010 global crisis from going under, but look at the treatment they’re getting from their own airport: 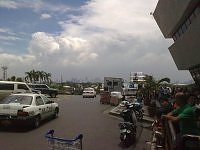 OFWs sent nearly $18.77 billion to the Philippines in 2010, accounting for nearly 10 percent of the country’s total GDP, according to the BSP. It also accounted for nearly one-third of the country’s Gross International Reserves of $62.1 billion as of December 2010.

The World Bank’s estimate was even higher at $21.3 billion, probably because it had estimates of remittances that didn’t pass thru BSP-supervised entities. This total pushed the Philippines to rank fourth in the World Bank’s chart on total inward remittances worldwide in 2010.

I hope the NAIA and the newer airports consider the OFW and Pinoy culture, particularly the need for families to be together at the last hours/minutes before departure. Imagine, hindi nga naman kayo magkikita over a period of one year or two years, and even three years, so it’s understandable that the children, the mothers, fathers, wives and husbands maximize the time to be together.

I hope they come up with an airport departure-area design that respects this OFW reality, and I hope they finally clean up the toilets.